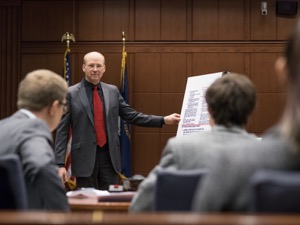 On October 4, 2018, a Kentucky jury found against defendant, Greenwich Insurance Co. in favor of dozens of heirs of Ben and Lillian Salyer, plaintiffs. The case arose from JD Carty and other companies insured by Greenwich for trespassing on land owned by the Salyer’s, building roads and drilling wells to access natural gas under the land for several years.

The jury determined that Greenwich acted in bad faith by refusing to settle claims in the matter. The jury awarded plaintiffs $15 million in compensatory and punitive damages.

Having found that Greenwich committed multiple violations of Kentucky’s Unfair Claims Settlement Practices Act, the jury awarded a total of $834,000 in anxiety and mental anguish damages to plaintiffs, plus $14.3 million in punitive damages.

Austin Mehr of Mehr, Fairbanks & Peterson, represented the heirs commented, “This verdict highlights the importance of Kentucky’s Unfair Claims Settlement Practices Act and the role it plays in allowing jurors to hold insurers accountable for their misconduct.”