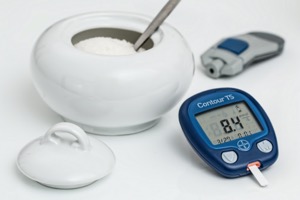 Millions of Americans are affected by diabetes mellitus. Disability claims filed by those who live with the disease are often denied benefits, even though the claimants are truly no longer able to work. Our lawyers have helped hundreds of people across the country with diabetes to overturn claim denials and secure these indispensable benefits. If your claim was denied unfairly, call Mehr, Fairbanks & Peterson for qualified assistance.

For a person with diabetes, their body cannot regulate the blood glucose (sugar) in their body. Insulin is the main hormone used by the body to regulate sugar. A diabetic’s body does not make enough insulin or cannot process the insulin produced by the pancreas.

Diabetes is a major cause of disability because it affects the entire body. For example, diabetes can cause diabetes blindness, decrease sexual activity, and destroy blood vessels all over the body. It is identified along with many serious complications and disabling symptoms.

If diabetes is not properly managed, the person has an increased risk of developing conditions such as hypoglycemia (high sugar) and diabetic ketoacidosis (dehydration from insulin deficiency). Disabling chronic conditions may develop, such as kidney failure, cardiovascular disease, and damage to the retina.

Diabetics also experience poor healing of wounds, and gangrene on the feet which may lead to amputation. People with diabetes also frequently suffer from diabetic neuropathy disability.

Type 1 diabetes is the most severe form of diabetes. Older names for Type 1 include juvenile diabetes, juvenile onset diabetes, and insulin-dependent diabetes mellitus (IDDM). IDDM is misleading because other types of diabetes besides Type 1 may require insulin. Type 1 appears during childhood or early adulthood. It is an autoimmune disorder in which cells in the immune system called T lymphocytes damage the insulin-producing cells in the pancreas. Then, the level of glucose in the blood becomes abnormally high, since glucose cannot get into the cells without enough insulin. Persons with Type 1 diabetes must take injections of insulin to correct the problem. Type 1 diabetes accounts for 5% to 10% of total cases of diabetes.

Medical research continues in an effort to prevent Type 1 diabetes mellitus, but so far it has not been successful. Unfortunately, there is no single “diabetic gene” that could be replaced with gene therapy to cure this disease; the immune system abnormalities are numerous and complex. Type 1 diabetes can result in complete destruction of the pancreatic islet cells over a period as short as 3 years. This means that Type 1 diabetes develops quickly, and a person with Type 1 diabetes needs to inject insulin early in the course of the disease.

Because of the marked fall in insulin, the symptoms and complications of Type 1 diabetes can be severe. Uncontrolled severe Type 1 diabetics typically have excessive urination, thirst, and appetite with weight loss. But they may have no appetite. And they may experience weakness, abdominal pain, nausea, and vomiting, along with sleepiness, lethargy, or even coma. A person may have these symptoms when first diagnosed. And a person with Type 1 diabetes may have these symptoms anytime he or she stops taking insulin.

The most common form (90%) of diabetes mellitus is Type 2. Those with Type 2 diabetes may or may not need to take insulin injections. Often, Type 2 diabetes can be controlled with diet, weight loss, exercise, and oral medications. Type 2 diabetes is also known as non-insulin dependent diabetes mellitus (NIDDM) in those who do not require insulin. Unlike Type 1 diabetes, Type 2 is not an autoimmune disorder, though the immune system and genetics may play a role in its development and progression.

The oral medications that many Type 2 diabetics take to control blood glucose work in one of two ways. Either they increase the amount of insulin that the pancreas is able to secrete. Or they improve the ability of the cells to use insulin thereby reducing insulin resistance. Studies have shown that exercise can decrease insulin resistance as much as oral medication.

Historically, Type 2 diabetes developed slowly over a period of years, and a person did not need to take insulin until he or she had the disease for a while. Type 2 diabetes has been known as “adult-onset diabetes mellitus” or “maturity-onset diabetes mellitus,” because it usually developed after age 40. Now in the U.S. even children are developing Type 2 diabetes. Onset at earlier ages is occurring because of increasing childhood obesity, lack of exercise, and access to high-fat junk food. The wave of Type 2 diabetes has not yet reached a peak, as the effects of the child obesity epidemic have not had time to fully develop, and the adult population continues to become increasingly obese.

Other Types of Diabetes

Your diabetes disability claim was rejected by your insurance company. What can you do?

The laws are significantly different for each type of claim, and not all attorneys are capable of practicing in these areas of law.

Our firm routinely works with complicated medical facts surrounding diabetes disability. We communicate with treating doctors and experts, and challenge insurance company physicians and other experts who seek to further their own interests. We have helped many disabled people, who are unable to work because of diabetes, successfully appeal denials and secure the benefits they deserve. Do not give up on your claim. Call Mehr, Fairbanks & Peterson Trial Lawyers Toll Free Today at 800-249-3731.