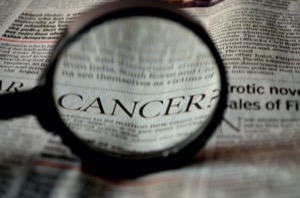 Have you ever questioned if you were at risk of cancer?

Cancer is a disease that effects millions each year. Cancer can start anywhere in the body and spread. It starts when cells grow completely out of control, overcrowding normal cells. This overcrowding makes it difficult for the body to respond and function correctly.

The treatments for cancer have improved immensely over the years. In the past, cancer was not treated well, causing millions to die. However, thanks to improvements in medical technology, more cancer patients than ever are able to live full lives after cancer treatment has concluded.

Some cancers can grow and spread quickly, while others grow slowly over time. Some cancers can be treated with surgery; others effectively respond to drugs called chemotherapy. In most cancer cases, a mixture of the two is used for the best results.

For each type of cancer, there are tests that can be done to determine the stage of a cancer. Normally, a lower stage (stage 1 or 2) means the cancer has not spread very much. A higher stage, such as stage 3 or 4, means it has spread more. Stage 4 is the highest and most severe stage of cancer.

Some forms of cancer run in certain families, but most cancers are not linked to the genes we inherit from our parents. Most cancers are caused by a gene change that starts in a single cell and develops over the course of a person’s life.

In recent years, advances in science has improved our working knowledge of cells, which are the basic building blocks of the body. All living things are made of cells. Complex animals, such as humans, have trillions of cells. These cells work together to form organs such as the, liver, heart and skin. Cancer begins when genes in a cell become mutated and the cell starts to grow and divide out of control.

Unfortunately, millions of families have been plagued with some form of cancer. Sometimes, a type of cancer can seem to run in the family. There could be multiple reasons to try and explain this. Cancer can be invoked by poor behavior choices, such as smoking or obesity, while others can be passed down through abnormal genes. Although it is often referred to as inherited cancer, what is actually inherited is the abnormal gene that leads to cancer.

Dried tobacco leaves are used to create cigarettes, cigars, and pipe tobacco. Other substances are added for flavor and also for a more enjoyable smoking experience. The smoke from these complex chemicals is produced by burning the mixture. Tobacco smoke is made up of thousands of chemicals, including almost 70 that are known to increase the user’s chances of cancer. Some of these chemicals include:

Many of these substances cause more than cancer. Some are known to cause heart disease, lung disease, and other serious health problems.

Because of the aging process involved with creating cigars, cigar tobacco has high concentrations of some nitrogen compounds. When the cigar tobacco is fermented and then smoked, these compounds give off sever tobacco-specific nitrosamines (TSNA’s), some of the most potent cancer-causing substances in existence.

E-cigarettes and vapes are electronic nicotine deliver systems (ENDS), are often used as a cigarette replacement. While these devices are marketed as safe and non-addictive, they often contain aerosols that contain addictive nicotine, flavorings, and a multitude of other chemicals that could be toxic or known to cause cancer. Some of these substances appear to contain lower levels of chemicals than traditional cigarettes, but the amounts of nicotine and other toxins in these products can vary, as they are not standardized.

Have you ever questioned how much daily habits like diet and exercise affect your risk for cancer? The answer is more than you might think. Recent research has shown that poor diet and exercise are two key factors that can increase a person’s risk of cancer.

Being overweight or obese increases the risk of several types of cancers, including breast, colon, endometrium, pancreas, kidney, and esophagus cancer. The excess weight causes the body to produce and circulate more insulin and estrogen, which are hormones that can stimulate cancer growth.

While watching what you eat is a key step to reducing your risk for cancer, exercise and an active lifestyle is another key. Being active helps reduce your cancer risk by helping control your weight, improving your hormone levels and how your immune system works.

Moderate activities classified as those that make you breathe as hard as you would during a brisk walk. This includes activities such as walking, biking, light jogging, etc. Vigorous activities are activities that increase your heart beat, force you to breathe faster and deeper, and induce sweating.

It is also important to limit sedentary behavior such as laying down, watching television, sitting for prolonged periods of time, etc. Being more physically active than usual can also have many health benefits.

The sun produces more than just light and heat to us, it also exposes us to ultraviolet radiation (UV). There are other sources of UV such as tanning beds, however, the sun is the most consistent UV exposure for most everyone.

You may be asking, “does UV radiation cause cancer?”

The answer is yes. Most skin cancers are a direct result of exposure to UV rays. Both basal cell and squamous cell cancers (two most common types of skin cancer) tend to be found and the most sun-exposed parts of a body, their occurrence is typically related to lifetime sun exposure.

Many studies have concluded that basal and squamous cell skin cancers are directly linked to behavio
rs that require people to be exposed to the sun or artificial sunrays for long periods of time. This includes exposure, such as:

UV radiation does not penetrate deeply into the body. Increased exposure to sunlight will most likely not cause cancer in any internal organs. However, some studies have shown possible links to some other cancers such as Merkel cell carcinoma (less common type of skin cancer), cancer of the lip, and some forms of eye cancer.

Exposure to other forms of radiation can increase a person’s chances of developing cancer. Some jobs such as mining jobs, likely increase the exposure to higher levels of radon. Radon is an odorless, colorless, radioactive gas. It forms naturally from the decay of radioactive elements, it is also found throughout the world in various amounts of rock and soil. As radon in the air breaks down, it can attach to dust particles and then can be inhaled into the lungs. These particles give off radiation that can damage the DNA inside the body’s cells.

Viruses and other infections

Viruses are small organisms; most cant even be seen with a microscope. They are composed of a small number of genes in the form of DNA or RNA, surrounded by a protein coating. It’s been known since the 20th century that infections with certain viruses, bacteria, and parasites have been recognized as risk types for several forms of cancer.

One of the most common viruses that can cause cancer is the human papilloma viruses (HPVs), a group of 150 related viruses. They are referred to as the papilloma viruses because some of them causes papilloma’s, which are known as warts.

All types of HPV are spread by contact (touch). There are more than 40 types of HPV that can be passed through sexual contact. While HPV infections are common, cancer caused by HPV is not common. Most people infected with HPV will not develop a cancer related to this infection.

The Epstein-Barr virus (EBV) is probably best known for causing infectious mononucleosis, often called “mono”. EBV is also called “the kissing disease”, as it can be passed from person to person by coughing, sneezing, sharing drinks or utensils, and kissing. While most people have no symptoms of EBV after the first few weeks, EBV infects and stays in certain white blood cells in the body.

EBV infections increase the risk of nasopharyngeal cancer (cancer in the back of the nose) and certain types of fast-growing lymphomas. It may also be linked to some forms of stomach cancer and even Hodgkin lymphoma. It is very unusual for people who have been infected with EBV to ever develop cancer due to their infection.

The acquired immune deficiency syndrome (AIDS), doesn’t appear to directly cause cancer. However, a HIV infection does increase a person’s risks of getting a few types of cancer.

HIV is not spread through insects, water, or casual contact such as shaking hands, hugging, coughing, sneezing, talking, or from sharing bathrooms, kitchens, phones, or computers. It is spread through semen, vaginal fluids, blood and breast milk from an HIV-infected person.

Even though the viruses and infections described here can increase a person’s risk of certain types of cancer, most people with these diseases or infections never develop cancer. The risk of cancer development is also influenced by other factors, such as diet, exercise, exposure to sunlight, and other lifestyle factors.

Learning that you have cancer is traumatic and devastating. Sadly, many people are unable to fight though this terrible disease. Because of the advancements in medicine and technology, we know more about cancer than we ever have. While there is no vaccine for cancer, there are things we can do every day to help decrease our risk of cancer. Avoiding tobacco products, maintaining a healthy lifestyle, and regular exercise regimen are a few ways to decrease your risk.

We meet with many cancer patients who are devastated to learn that their disability benefits for cancer were wrongfully denied. We have successfully represented many claimants in their fight to obtain the disability benefits they deserve. If you or a loved one have or are preparing to file an individual or long-term disability insurance claim – or if your benefits have been wrongfully delayed or denied – Mehr, Fairbanks & Peterson Trial Lawyers can help you retain your rights and benefits. Call Toll-free at 800-249-3731 for proper representation.