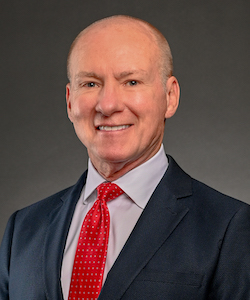 Austin represents people in bad faith insurance and ERISA claims, who have been treated unfairly and who don't get their claims paid fairly or promptly by insurance companies. It happens all too often.

Austin lives downtown Lexington with his wife, Jill Hall, who is also an attorney. They enjoy outdoor activities including skiing, boating, and cycling, and visiting their three children who live in Nashville, Colorado Springs, and Chicago.

Austin is a volunteer board member of the Fayette County Bar Association Foundation, a nonprofit that manages and donates money to various community legal nonprofit organizations to help people in the central Kentucky community. He is on the Board of the Carnegie Learning Center, a Lexington based non-profit that helps people, primarily children, to read and write. He volunteers his legal expertise to help people with limited resources on pro bono cases. Austin also devotes time to volunteer at the Fayette County Legal Help Center.

His published book “Bad Faith Insurance Law in Kentucky,” a book focusing on insurance law and the way insurance companies treated people, has been read by other lawyers and judges to understand how insurance companies sometimes treat people unfairly and in violation of our laws.

Austin has developed a law practice of 39 years, concentrating on representing individuals who have received unfair treatment on insurance claims.

Mr. Mehr is frequently asked to lecture on the topic of insurance bad faith in Kentucky. In addition to in-state lectures, he also lectures in other states around the country and out-of-country locations such as Ontario, Canada. Some of Mr. Mehr’s speaking engagements include:

Contact Us
Practice Areas
Client Reviews
★★★★★
“Bartley is working on my case every one I have talked to is extremely nice he sends emails or mails something keeping me up dated when you talk to him he explains it to where you can understand I'm very satisfied with what he has done and what he is doing for me would advise anyone to contact him for your needs” S. A.
★★★★★
"With everything to lose I laid my vulnerability in the hands of Bartley Hagerman. I cannot put into words the hard work, dedication, and compassion that I was shown. Bartley was able to help me when the odds were stacked against me. I am beyond grateful!" C. W.
★★★★★
"When my long term disability case got canceled, I didn’t know what to do or who to turn to. Luckily someone I knew recommended Mehr, Fairbanks & Peterson. I met up with Mr. Bartley Hagerman and not only did he take my case, he got my long term disability reinstated. He keeps you updated and works hard for you! Highly recommend Mr. Bartley Hagerman at Mehr, Fairbanks & Peterson!" D. C.
View More
Submit a Law Firm Client Review